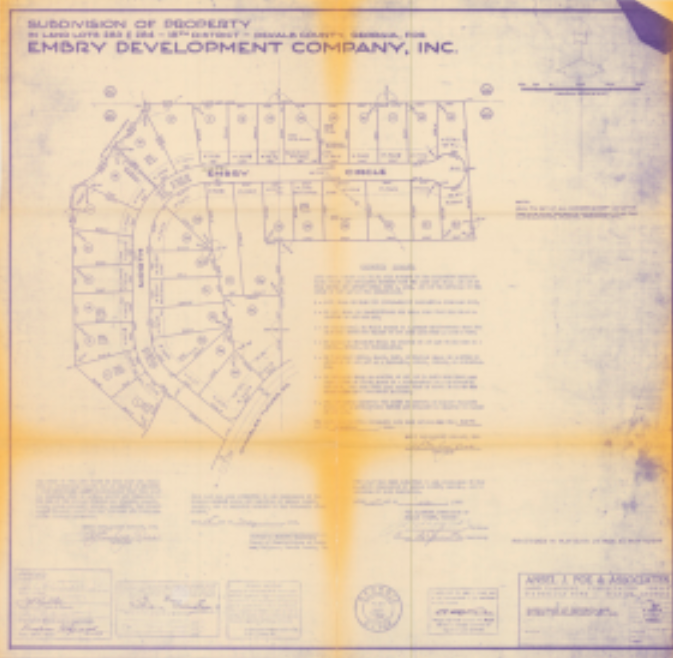 Embry Hills Embry Hills is a planned community built in the 1950s. Located in Chamblee in northwest DeKalb County, the community is bound by Henderson Mill Road, Chamblee-Tucker Road, and Northcrest Road. The development of the Embry Hills community was a direct result of the dramatic increase in industry that occurred after World War II in Chamblee. Frito-Lay, Eastman Kodak, and General Electric are some of the companies that established offices and plants in Chamblee. The Embry Realty Company saw an opportunity to develop a suburban housing community which would be convenient to the businesses in Chamblee. Jack Embry, who had formerly worked for Adair Realty, formed a partnership with his brothers, James, Neal, and Theo, to found the Embry Realty Company in the late 1940s. They began building houses in East Lake, Decatur, and East Atlanta before purchasing the 600 acres of farmland on which they would build Embry Hills. The Embry brothers hired the architecture firm Heery and Heery to design the contemporary Ranch and split-level homes, and, in 1956, construction began with the firm of Poe and King as planners and engineers. Embry Hills was much more than a residential subdivision. Along with houses, there were apartments, offices, a medical building, and retail spaces. In 1958, the Embry Hills Club, a swim and tennis club, was created and was still active in 2010. In 1963, the Embry Hills Shopping Center was constructed; it housed a hardware store, drug store, five and dime, laundromat, and the Embry Hills Barber Shop. Also in 1963, the Embry Hills Kindergarten began in a small neighborhood church. Many of the houses in Embry Hills featured unique and cutting-edge designs, which were a sharp contrast to the more traditional designs often shown in plan books. Along with the characteristic traditional red brick Ranch, Heery and Heery designed a variety of houses that experimented with the Ranch form and building materials. The architects also designed SplitLevels for the neighborhood, perhaps to accommodate the hilly topography of the area.

Let's get in touch

Give us a call or drop by anytime, we endeavour to answer all enquiries within 24 hours on business days.